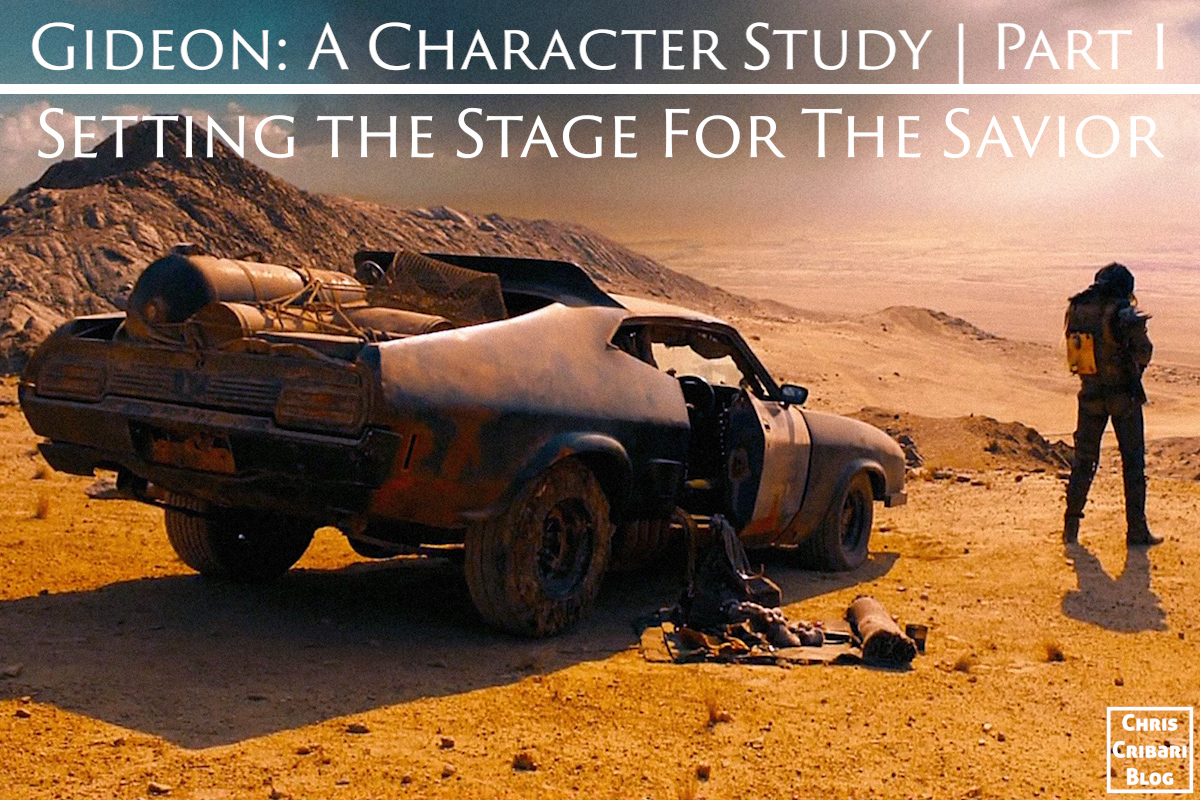 When I say “Bible Heroes,” who comes to mind? Daniel? Esther? Samson? You know, those historical figures that did mighty things for the LORD and are praised for their amazing courage in Scripture. Well for now, forget about those peeps because today we are going to look at one of the more underrated figures of the Bible: Gideon. This 12-part blog series will be a study on the life, death, and legacy of Gideon. A man whose impact was so far reaching in the Bible that he is praised by the author of the book of Hebrews as a man of faith who served God diligently, but we’ll get to that later. For now, let’s look at some historical details to set the stage for this first installment in this series.

The majority of Gideon’s story is written in the book of Judges in the Bible. The author of Judges is most likely the Prophet Samuel, but that’s not for certain and is only attributed to Samuel because of the oral Jewish tradition. Although the case can be made that it was a collaborative effort (2). The author would have to be someone who lived just after this period in history, about 1045-1000 B.C. and Samuel the Prophet fits this bill the best. Also of note, “the Book of Ruth was originally a part of the Book of Judges, but in A.D. 450 it was removed to become a book of its own” (3). So the author of Judges may have also been the author of the Book of Ruth.

The book of Judges is the Mad Max of the Bible and the time of the Judges was kind of insane. There was outright anarchy, rebellion, violence, and all other things of that nasty sort happening everywhere you went. Then every once in awhile, God would handpick someone to be a judge and do His will in drawing His chosen people back to Him. Whether that be Deborah or Samson, God would pick out some nobody to do something absolutely magnificent, in order to bring God’s people back to Himself. Israel at this time was a wreck and broken from the inside by sin, as well as on the verge of war by opposing nations seeking to annihilate them permanently.

As the book of Judges says itself, “In those days there was no king in Israel; everyone did what was right in his own eyes (4).” Rightly so, because the people of Israel rejected God and went their own way towards sin. This time period could be compared to an emergency room where one goes to die, yet lives. Where death and life clash. Where eternity and time cross paths. Often the times of Judges was a continual back and forth of resuscitation. Where Israel would spiritually die, God would resuscitate them, and then they would experience spiritual revival. This is where we start our study in the life of Gideon. Israel is dead and needs God, so God decides to use Gideon to get’em back to being alive in Him.

“Then the sons of Israel did what was evil in the sight of the LORD, and the LORD gave them into the hands of Midian seven years. The power of Midian prevailed against Israel. Because of Midian the sons of Israel made for themselves the dens which were in the mountains and the caves and the strongholds. For it was when Israel had sown, that the Midianites would come up with the Amalekites and the sons of the east and go against them. So they would camp against them and destroy the produce of the earth as far as Gaza, and leave no sustenance in Israel as well as no sheep, ox, or donkey. For they would come up with their livestock and their tents, they would come in like locusts for number, both they and their camels were innumerable; and they came into the land to devastate it. So Israel was brought very low because of Midian, and the sons of Israel cried to the LORD.” (NASB Judges 6:1-6)

Notice how Israel is always in this continuous cycle of dependency for God and in-dependency from God. How in the previous chapter, “the land was undisturbed for forty years” (5), completely dependent on God’s mercies and now after merely a generation are back to their evil ways. In chapter 6 we come to the second half of this vicious cycle of humanity’s relationship to God and His mercies: the independent stage. It’s a very dangerous stage. Full of volatile lifestyles and chaotic consequences on humanity’s part as God eagerly awaits to save His precious nation.

So because of this rebellion, God allows the Midianites to completely wreck the lands of Israel. The Midianites and Amalekites were Arabian nomad races: groups of people that wandered for resources with no homeland. They were from the east (modern day Middle East) and would continuously raid Israel of all its resources until they were full and then leave, while the Israelites would take shelter in caves, mountains, or strongholds to avoid conflict. Since their numbers were too many and the Israelites were no match for such mighty people groups like the Midianites and Amalekites, this series of raids went on for seven long years.

It’s usually during times of war when one finds out what they are made of in the face of extreme circumstances. Whether that be physical, mental, or spiritual, warfare is the ultimate way of revealing one’s true character. Or in this case, the character of the nation of Israel: afraid and resistant to conflict. They showed their true colors. They let their enemies take anything they desired as they sat back in fear. It was probably embarrassing for those who lived during the days of deliverance when Deborah and Barak faithfully did God’s will, which led to ending the tyranny of Jabin the king of Canaan just forty years ago (6). But Israel in their time of trouble finally cried out to God and God, in the following verses of Chapter 6, replies with some scathing words of correction and comfort.

“Now it came about when the sons of Israel cried to the LORD on account of Midian, that the LORD sent a prophet to the sons of Israel, and he said to them, “Thus says the LORD, the God of Israel, ‘It was I who brought you up from Egypt and brought you out from the house of slavery. I delivered you from the hands of all your oppressors, and dispossessed them before you and gave you their land, and I said to you, “I am the LORD your God; you shall not fear the gods of the Amorites in whose land you live.” But you have not obeyed Me.”’”” (NASB Judges 6:7-10)

The sons of Israel were guilty for committing sin against God by disobeying His laws and doing their own thing. Now they are rightfully repenting of their sins and believing in the saving grace of God. In response to their turning away from sin, God sends a prophet to speak on His behalf and speaks to the people of Israel. In His response as spoken through the prophet, God essentially says “Did you forget who I am? What I’ve done for you? How I saved you from back in the day?” Even when Israel was again in rebellion towards God, He still spares them and keeps His promises. A key theme in the book of Judges is God’s ability keep His promises and the inability of mankind to listen to Him.

Although they have rightly repented and turned back to God, sin has long-lasting consequences that are harder to get rid of than the actual sin. In this case, the Amorites and the Midianites are back in the picture. The next step is for Israel to remove the their enemies who are destroying God’s chosen people. But how? They’re no match! The Israelites have nothing compared to the massive forces of the Amorites and the Midianites. Well, God has a plan of redemption and it begins with the heroes journey of one specific man: Gideon. With that, Godspeed and Jesus bless!