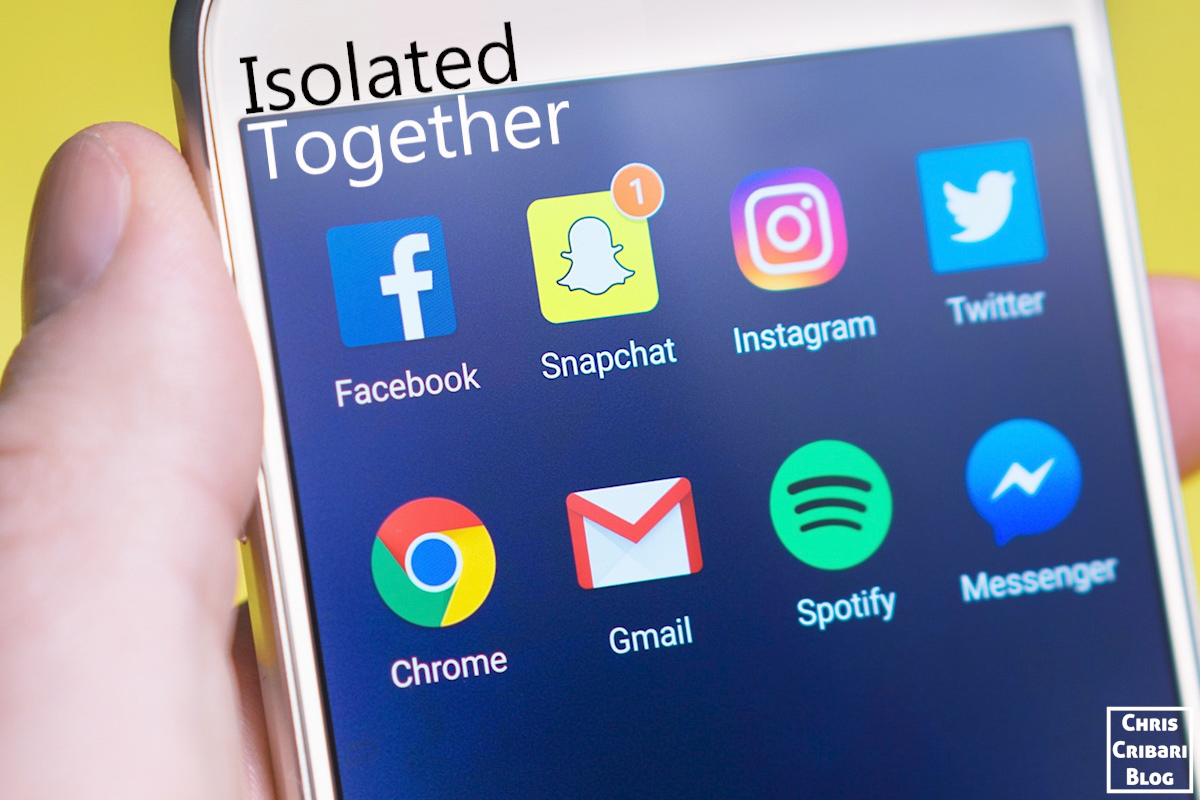 Believe it or not, there once was a time when people had to talk in person. Face-to-face, breathing the same air, in the same space, and hold eye contact. Crazy right? It was a time where people did this crazy thing called personal communication. A blissful span of time where when one person wanted to interact socially with another person, they would actually interact with that person socially. But that all changed with one simple, yet immensely influential tool: social media.

It is the connective tissue of the 21st century. The webbing of the social spider that travels back and forth across the internet. In today’s world, it is not too hard to go about your day without being confronted by the ripple effects of social media. Whether it be Facebook, Instagram, Kikme, Pinterest, Snapchat, TikTok, Twitter, YouTube or the like, their presence is well known to almost everyone. Yet have we ever stepped back and asked “Just as there are good side effects to social media use, can there be bad ones as well?”

Unequivocally, the answer is yes. While social media has paved the way for great advancements in society such as the expansion of globalization, introducing us to the information age, a more-informed public, and instant communication. On the flip side, it has also brought with it negative side effects with short and long lasting impressions on modern mankind. For the sake of time, I will focus on three briefly in this blog-post: the physical effects, the sociological effects, and the spiritual effects. First let’s start with the physical effects.

If it was not apparent already, social media has over time altered human anatomy and the way we move about in life. This can be seen in how some people have severe curves in the vertebrae due to slouching over a computer desk (or a mobile device) when interacting online. This curvature is evident in their backs or necks, along with the rise in the general population being diagnosed with some form of nearsightedness. Various studies on this issue have concluded that “Between 1970 and 2000, myopia — nearsightedness — prevalence in the U.S. rose from 25 percent to nearly 42 percent among people ages 12 to 54” (2) and with the spike of online interaction via social media, the numbers have continued to climb.

Other common symptoms include, but are not limited to obesity, attention deficit disorder (ADD), and even more serious addictions that are directly caused by the abuse of social media. These more serious addictions that stem from the gateway drug of the digital world range from substance abuse to an increase in anxiety related mental health issues in adolescents. This is due to such variables as the amount of information available online through hyper-networking, the brain seeking different stimulations to hit high dopamine levels, and the addictive nature of social media leading to misconstrued fantasies. Studies now show that Gen Z is one of the most depressed and least sexually active generations too, which can be indicative of the effects of social media. In the long run, social media is changing us physically.

Allen and co. in the Australian Journal of Educational and Developmental Psychology 31 [(1):1-14 · July 2014] conducted an experiment exploring the effects of social media on adolescents (i.e. Gen Z) and concluded that

“Mixed findings are reported regarding the role that social media plays in fostering social connectedness, which suggests that young people may experience both positive and negative psychological outcomes. As a result, this article argues that online tools create a paradox for social connectedness. On one hand, they elevate the ease in which individuals may form and create online groups and communities, but on the other, they can create a source of alienation and ostracism (3).”

This ostracised Gen Z has formed a socio-conscious isolated togetherness where they are together, but isolated in attention and activity. Similar to how people disengage on an airplane flight, they are all heading to the same destination with the same people for a specified duration of time, but are completely removed from social interaction whatsoever with their fellow neighbors. Why?

Hard to say, but being isolated together is something we all do in certain situations like riding the bus or waiting in line at the DMV, except now Gen Z does it to friends and family. Not total strangers, but those closest to them both in culture and community. Doesn’t that seem a bit odd that they would rather stare at blue lit phones, than enjoy the company of their loved ones? For Gen Z, we are setting the example that this is normal and they are following our lead.

Regardless, social media also plays off of this “us vs. them” mentality innate in all of us by giving us an outlet to feed our egos in moments of complete social isolation. We can pretend we are together with someone we know virtually, when in reality we are alone with strangers or even with no one around. Odd how instead of expanding our social circles when introduced to new personalities in our world, we keep our small circles squares and inevitably block ourselves into our own tiny bubble castles with those we would rather talk to, instead of talking to those people.

It’s amazing how Christians still wonder why evangelism is dead in the West. We chose to preach to the church, instead of the community. We would rather exchange cute quotes with those who believe what we believe, than share worldviews with those whose beliefs delineate from our own ideas regarding what is true. A pluralistic society like America can quickly become poisonous if the bridges that bring us together are burned down in the face of filtered tolerance.

This is the most important effect and I see it a lot. Less praying and more posting. Although social disconnectedness is bad, along with physical deterioration from electronic overuse, nothing is worse than spiritual separation. As we spend more and more of our time online, we spend less and less with God. We prefer tweeting, rather than serious study of God’s Word. We would rather check Instagram for hearts, then check our hearts for sin.

This spiritual separation is our ultimate devolution and is yet another blockade from connecting with our great God. With all of our attention on ourselves, we blur the line between who we are and who we say we are to the world. As we jump into the matrix of the digital world, we place our masks on and dance along with the masquerade of happiness that so many of us lie about. A lot of us pretend to be content and happy, yet our “good vibes” cannot rebuild this spiritual separation.

The only cure to this disconnect with God is to disconnect from social media and all other distractions that draw us away from God. We then are able to reconnect with God when we are at a distraction-less state and ready to commune with our Maker. For the sake of our spiritual channel of relation to God, we may need to cut down on our consumption of social media and our desire to connect digitally.

By this point, you may think I am some sort of Amish, “technology is Satanic” types of people that completely avoids anything modern. That could not be farther from the truth. In fact, I use social media all the time! It’s my job as a content creator and I use it frequently for ministry too. The only reason I would be against social media use is when it affects me or others physically, socially, and/or spiritually. If one or all of those factors are hindered, then it is time to unplug and fix those because your body, your social circles, and our God matter more than viral videos.

Is social media bad? No, not at all. Does it have both good and bad connotations when using it excessively on a daily basis? Yes, it does.

Like fitness, the pursuit of being physically healthy and in shape is not bad at all. Indeed, it is really good for you and has lots of benefits. But when someone decides to workout every single day for hours on end they hit a point where their conventional habit turns into an addiction with negative effects. As Dr. Holly Parker, a Harvard University psychologist and certified personal trainer, once said in an article for Fox News, “The benefits you want from working out—getting leaner, stronger, healthier—reverse when you don’t take breaks” (4). Put plainly, too much good can be bad. Use social media however and whenever you want, but take a break when needed.

In short, it really is a balancing act as you use social media to touch base with loved ones and meet new people, while in the same respect getting instant news and entertainment. With that, there has to be a point where you must decide when you have had enough for one day. Take a break and do something else. There is no need to be online 24/7.

It’s not healthy to stay wired all the time. For once, take a break for not only your own sake, but for the sake of others. Learn to understand the value of life and time by taking moments throughout your day-to-day routine to appreciate the simply astounding things no app could ever capture. With that, Godspeed and Jesus bless!

One thought on “Isolated Together”